This postage stamp was issued as part of a joint issue with San Marino and Vatican City for the Giornata della Lingua Italiana (Celebration Day of the Italian Language) in 2009. It is also the fourth issue in the Festival internazionale della Filatelia "Italy 2009" (International Festival of Philately) series.

The stamp depicts a scene from the beginning of Inferno in which Dante (accompanied by Virgil in this illustration but not in the text) is blocked by three beasts. The scene is taken from a miniature in Codex Urbinate Latino 365, a fifteenth-century manuscript in the Vatican Library. Each stamp is printed adjacent to a label with the third line from Inferno 1: "ché la / diritta / via / era / smarrita." (that the right way was lost). The first two lines of Inferno appear on the Vatican City and San Marino stamps, respectively. The stamp has text as follows: at the top: "€ 0,60"; at the bottom: "ITALIA"; and along the bottom, the abbreviated name of the printer: "I.P.Z.S. S.p.A. - ROMA - 2009" (Istituto Poligrafico e Zecca dello Stato). The stamp was designed by Mauro Olivieri and Orlando Tomassi. 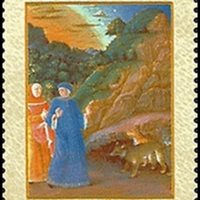